Dubbed “masters of soulful folk” by Paste, The Wood Brothers formed after brothers Chris and Oliver Wood pursued separate musical careers for 15 years. Chris already had legions of devoted fans for his incomparable work as one-third of Medeski Martin &Wood, while Oliver toured with Tinsley Ellis before releasing a half-dozen albums with his band King Johnson. With drummer Jano Rix added as a permanent third member, it’s become quite clear that The Wood Brothers is indeed the main act. 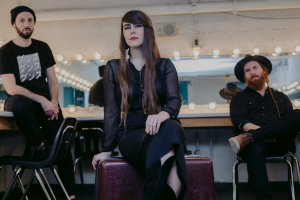 Kat Wright, Bob Wagner and Josh Weinstein
lean into their trio formation, showcasing their
folky/rootsy selves, all stripped down, a
triangulation of their strengths, their bareness, their
imperfect humanness, their voices, their ferocious
tenderness, their love of songs and singing and story.